Why is it important for this museum to be built?

This museum will provide an educational venue that presents an unbiased account of the Vietnam Era that will allow visitors to develop their own understanding of one of America's most controversial periods. Accurate answers to this war's questions are important to our society; to help heal the scars that remain and ensure that we learn from our past. This museum will help those who were involved, whether as participants from the five services involved in the war, anti-war activists, family members of those who served or just observers, to remember, and better understand, the key happenings of those times in order to finally be able to move on.

What makes this museum unique?

This museum isn't a reflective static monument or memorial, but an educational venue designed to cultivate a better understanding of the era and how it affected those that lived through it.

Who is to be served by the museum?

The museum serves anyone with an interest in American history; anyone who participated in, or was affected by, the Vietnam Era; and anyone who seeks to understand why this short period in our history was so important and so deeply affected our country and the world. It will provide a place where future generations can study this important period in history.

Why so many different displays...
About the opposition to the war... About the people of Vietnam... About their culture?

The displays are designed to show as many aspects of the Vietnam War and the Era as possible. It is important that visitors appreciate not only the military aspects, but how the Vietnamese culture affected the conduct and outcome of the war; how events in the US contributed to the eventual outcome; and how events in Vietnam affected the US throughout the rest of the 20th century--and into the 21st Century."

Why is it planned for Mineral Wells, Texas?

This site was chosen for the museum because the most visible and remembered symbol of the Vietnam War was the helicopter, and the majority of Vietnam helicopter pilots began their training at Fort Wolters in Mineral Wells, Texas.

The site is also less than an hour's drive from the heart of the Dallas-Fort Worth metroplex, an area with a population of over 4 million people and the home of DFW International Airport with regularly scheduled flights to major cities in the US and worldwide.

For answers to your other questions about the museum, please contact the museum. 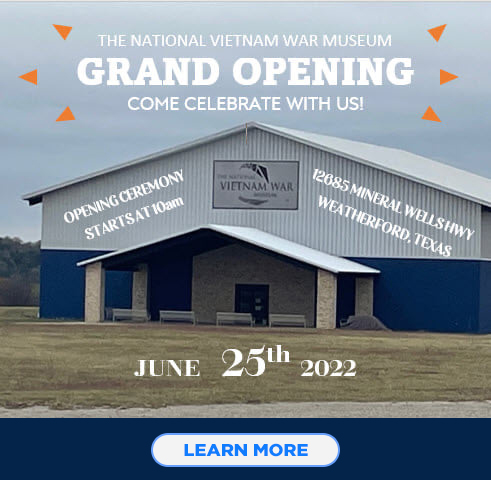